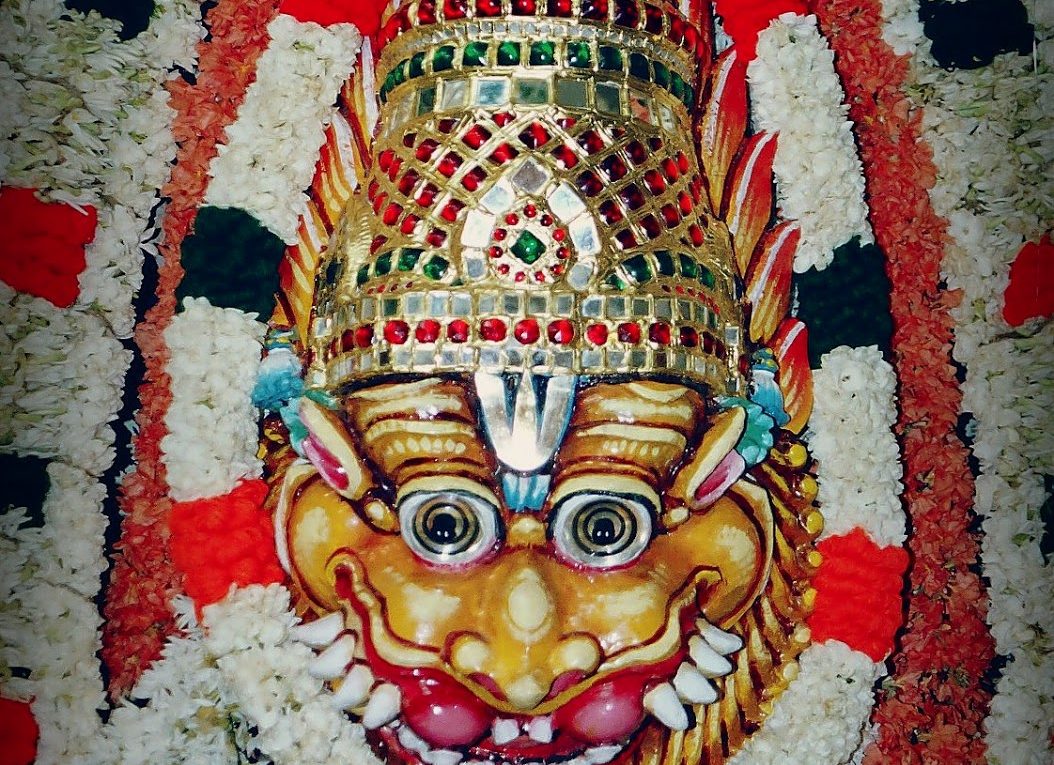 When it is uttered as ‘drama’, in Tamilnadu, it is obvious to get reminded of personalities like Shri Shankardas Swamigal, Pammal Sambandha Mudaliyar. They were the pioneers in this field in the previous century and on advent of film industry the persons who were in close proximity with them evolved into popular personalities of the industry. In early days, the films were based on the epics, and religious or historical stories. These narratives had been existing over centuries and have been portrayed as performing arts through theatre or operas.

One among the Thanjavur Nayak kings, Vijayaraghava Nayak (1634 -1673) is said to have composed over 32 dance dramas and most of them were staged in the thousand pillared hall of the Rajagopalaswami temple at Mannargudi. The most important among the dramas written by him is the ‘Prahaladha Charithram’. The ‘Prahaladha Charithram’ as a dance drama is popular in Orissa, Karnataka, Andhra, Kerala, and Tamilnadu even today. As the reminiscences of the Nayaks contribution to fine arts we are aware of the “Bhagavatha Mela” tradition nurtured in places like Melattur, Saliyamangalam, etc where every year during the Narasimha Jayanthi festival the ‘Prahaladha charithram’ is performed vibrantly as a Telugu dance drama, a devotional offering to the god. In the similar context the ”Prahalada Charithram” is performed in Tamil in many regions of Tamilnadu by various communities. 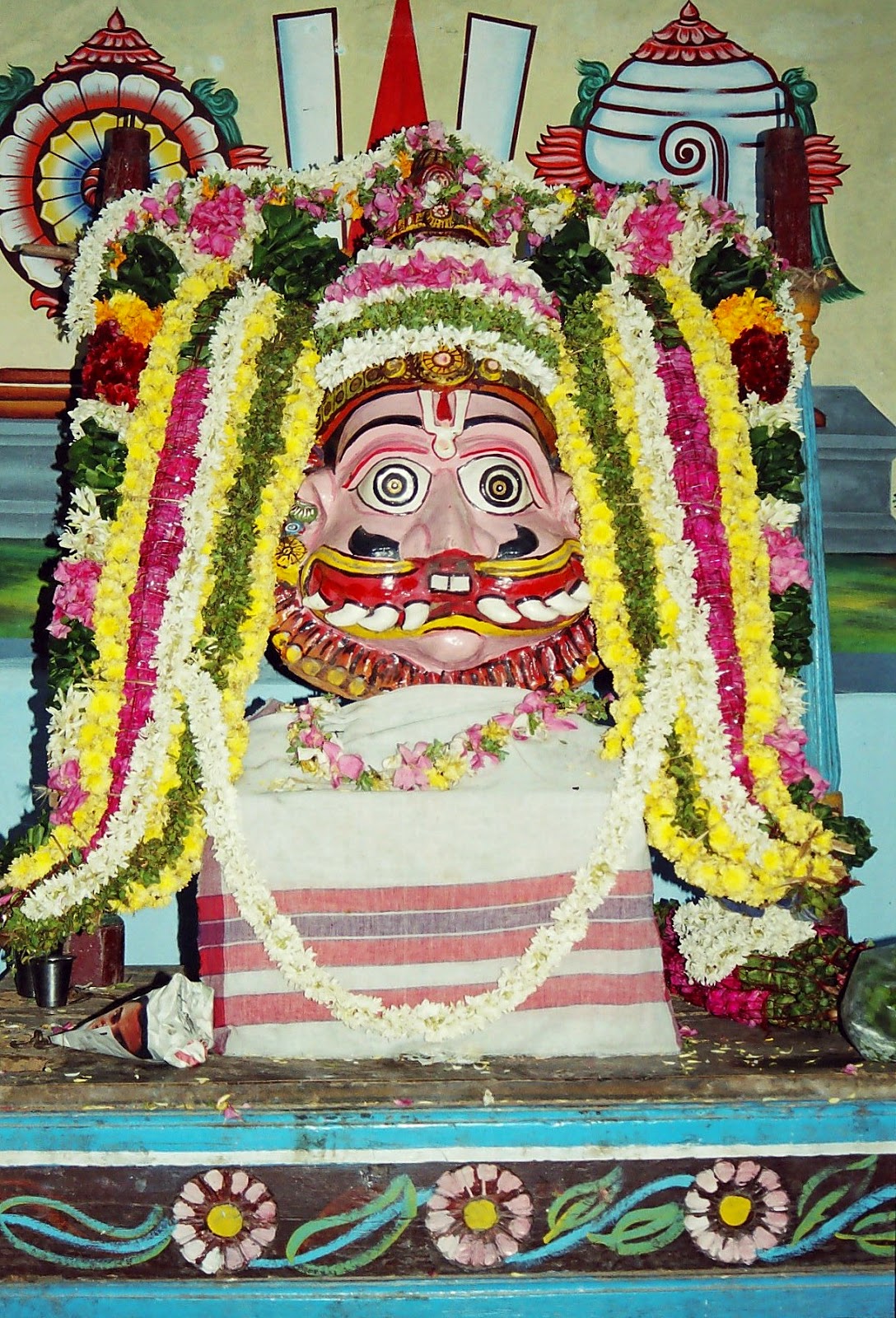 There are a wide range of traditional performance arts as theatre, operas, dramas, etc in Tamilnadu, existing not only as an entertainment but also as a ritual practice related to various cults. Similar to the Bharatha koothu which is performed as a tradition in the Draupadi Amman temples as a part of the cult, various dramas are enacted around the Thanjavur, Nagapattinam, Tiruvarur districts.The ‘Manu Neethi Cholan’ drama performed in Tiruvarur, the ‘Siruthondar Nadagam’ performed in Thiruchengattangudi and Thanjavur,etc falls under this category. Of these the most popular one performed in many number of places is the ‘Prahaladha Charithram’ also termed in Tamil as ‘Iranian Nadagam’, the Play of Iranian. 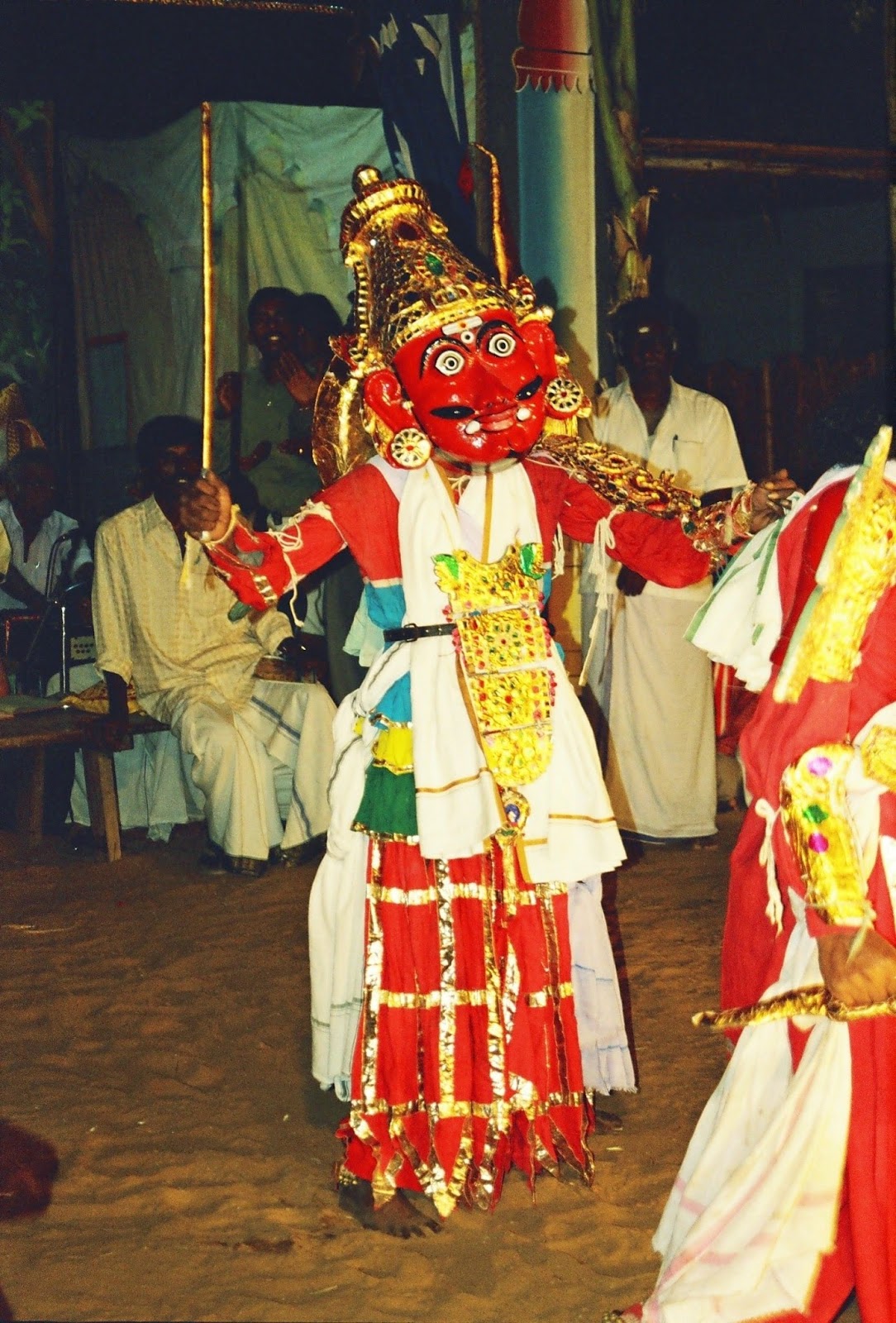 The first movie with speech in the Southern India is supposed to be the Prahaladha Charithram in Telugu. 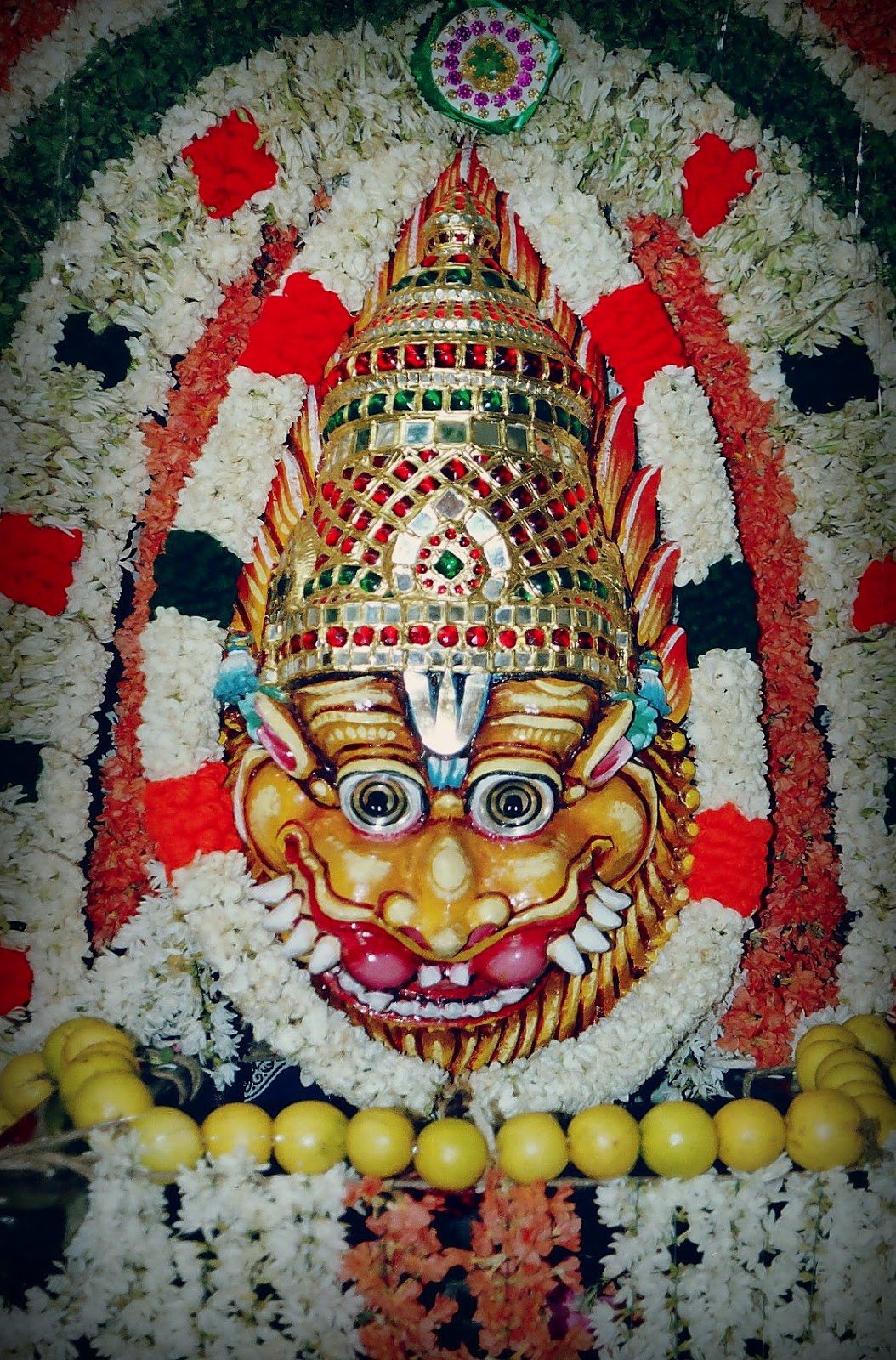 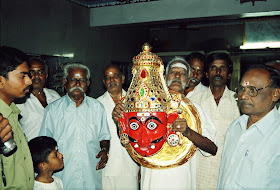 The Iranian Nadagam is performed in Tamil as a heirloom by the Sourashtra community in Ayyampettai near Kumbakonam, Melai Thirubhuvanam, Ammaiyappan Thenkal and Ammaiyappan Ilangudi near Tiruvarur; In Sarukkai Akkaraipoondi the Moopanar community performs; the Kallar community and Naidu community performs in the villages of Archutthipattu, Narthevankudikadu and Vadakku Natham; the Smartha Brahmin community performs in Thepperumanallur; the kannada speaking Vokkaliga Gowda community performs in the villages Bagathur, Vellikuppampalayam near Sirumugai in the Coimbatore District. Also, there are evidences that this performance has happened in many more villages like Thuvarangurichi, Panayakkottai, Arasur, Sulamangalam, etc.In all the above said places the Iranian Nadagam is performed as a community theatre by non-professional local people who perform the roles of the characters as a token of worship of the deity Narasimha. 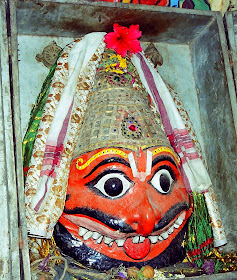 Unlike the Bharatha koothu in the Northern parts of Tamilnadu where the entire village becomes the stage, the Iranian Nadagam/Prahaladha nadagam is performed on a stage prepared for this purpose blocking a main street of the village. In Thepperumanallur it is performed in the Varadarajaswami temple and in Bagathur in an open ground. The participants, being non-professional locals, are trained by rehearsals,a few weeks prior to the performance, by a senior Bhagavathar or a KoothuVadhiyar.Songs, dialogues , acting and all that is required are taught. The main roles are performed by the well experienced persons while the other roles are allocated for the new comers. As a vow to the deity and out of devotion every year there is a considerable number of new comers; however, the roles of Iranian, Leelavathi and Prahaladhan are performed only by senior artists. In all the places only men perform even the role of female characters but for Archutthippattu where girls below ten years perform the women characters. Also it is a unique presentation of two persons playing the same role, who appear simultaneously as a twin perfomance in Archutthipattu, Narthevankudikadu, etc. In the same scene, it is a spectacular view to see two Iranian, two Leelavathy and two Prahaladhan performing simultaneously, a specialty of the theatre of these villages. 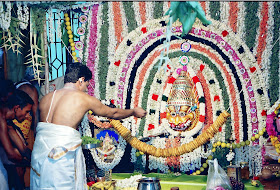 A sacred mask of the lion face of Narasimha made out of wood from a fig tree plays a prime role in this theatre. Named as Narasimha Sirasu (Narasimha mudi), the mask is kept and worshipped in the village temple and is brought to the stage only in the specific time after due rituals are performed. During the years when there is not enough funds to perform the play, the Mask is placed on an alter and worshipped, in front of which the ‘Pallayam’, an offering of steamed rice, jagery, curd and plantain spread on a plantain leaf, etc., is offered and the songs and dialogues of the play are recited. In the village Hasanamapettai in Thiruvannamalai district, the Narasimha Mudi is kept in a Bhajanai Kovil and worshipped on Saturdays by the Sengundha Mudaliar community, in the village Panappakkam in Vellore district, a chosen person wears the mask and walks down the streets as a sacred ritual on all Saturdays of the Purattasi month. A palm-leaf manuscript of the Prahaladha Charithiram was found in Dharmapuri. Thus being evidences, we can identify the spread of this theatre tradition in Northern parts of Tamil Nadu also. 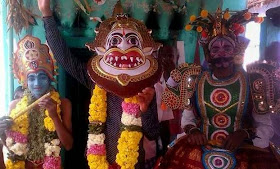 The Prahaladha Charithiram AKA Iranian Nadagam is performed as a worship of the deity on the occasion of Narasimha Jayanthi which falls on the Shukla Chathurdashi, the fourteenth phase after the new moon marking the Swathi nakshathram during the Tamil month of Vaikasi. However, in some places the village finds an auspicious day for the event between the months of Vaikasi to Aadi. In Bagathur and Vellikuppampalayam near Sirumugai the Prahaladha Charithtiram is performed for two days starting on the first day of Thai. 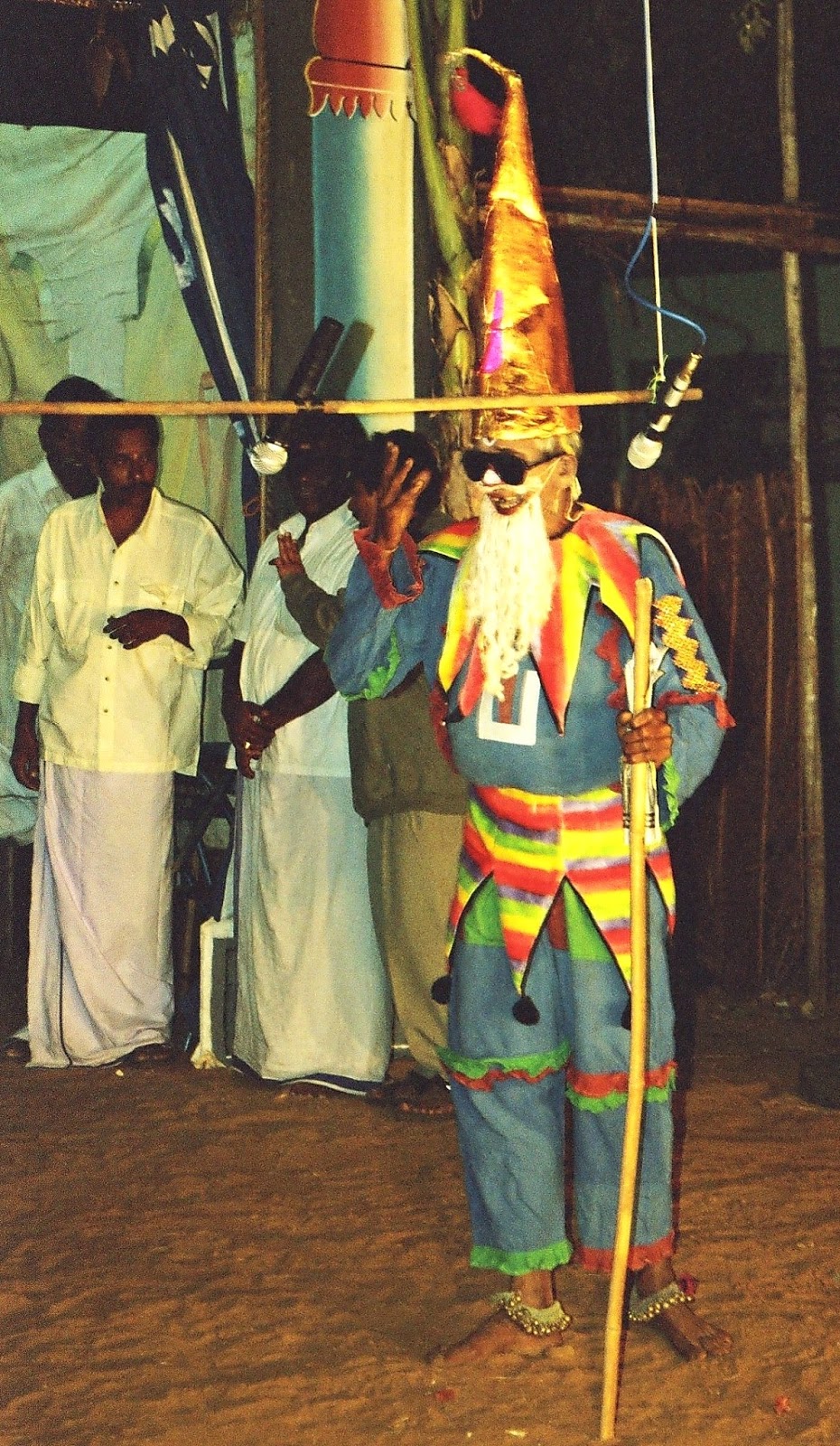 The drama begins at about 10 p m and goes on throughout the night starting with the Konangi welcoming the audience. Vinayagar thudhi, Iraniyakkadhan slayed by Varaha avatar, the entire story of Iranian and Prahaladhan is enacted. On the final day, at dawn, the Avatharam of Narasimha, duel, slaying of Iranian and finally the coronation of Prahaladha concludes the show.At dawn, when Narasimha emerges, women make offerings of ‘Maavilakku’ as a vow for want of good fortune or for progeny. In Archuthippattu people make the mavilakku over their torso and fulfil their vow later as the Narasimha performer comes in procession down the streets.People worship him with devotion by offering ‘Padhapoojai’ and circumblating him 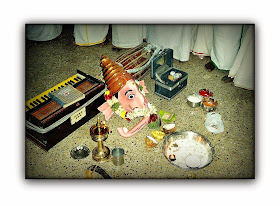 Though it is a story from the myth which is enacted, the uniqueness of the traditional theatre is that the Konangi, popularly called as the buffoon, connects the physical and the meta physical realm and time frame through his dialogues and conversations. On his entry he sings ‘vandanamam vandanam vandha sanam kundhanam’ inviting the audience and addresses the participants, the sponsors and all including those who assist even in doing odd jobs related to the event, without any discrimination. He relates the instances of the myth enacted with the current day status of the same like the educational system of today is discussed when Iranian summons the ChandamarutharVadhiyar to enroll Prahaladha in school, the importance of women participation in all sectors is discussed as Iranian consults Leelavathy about the child’s future. Konangi’s dialogues with the maruthuvachi (maid nurse), paambupidaran (snake charmer), Ottar (one who digs well), sembadavar(fishermen), yaanaipaagan (mahout), mallar (wrestlers), etc, links the myth with the current day community and household issues in a farcical manner. This paves way for a social self analysis to ponder over implications and get self-tuned. 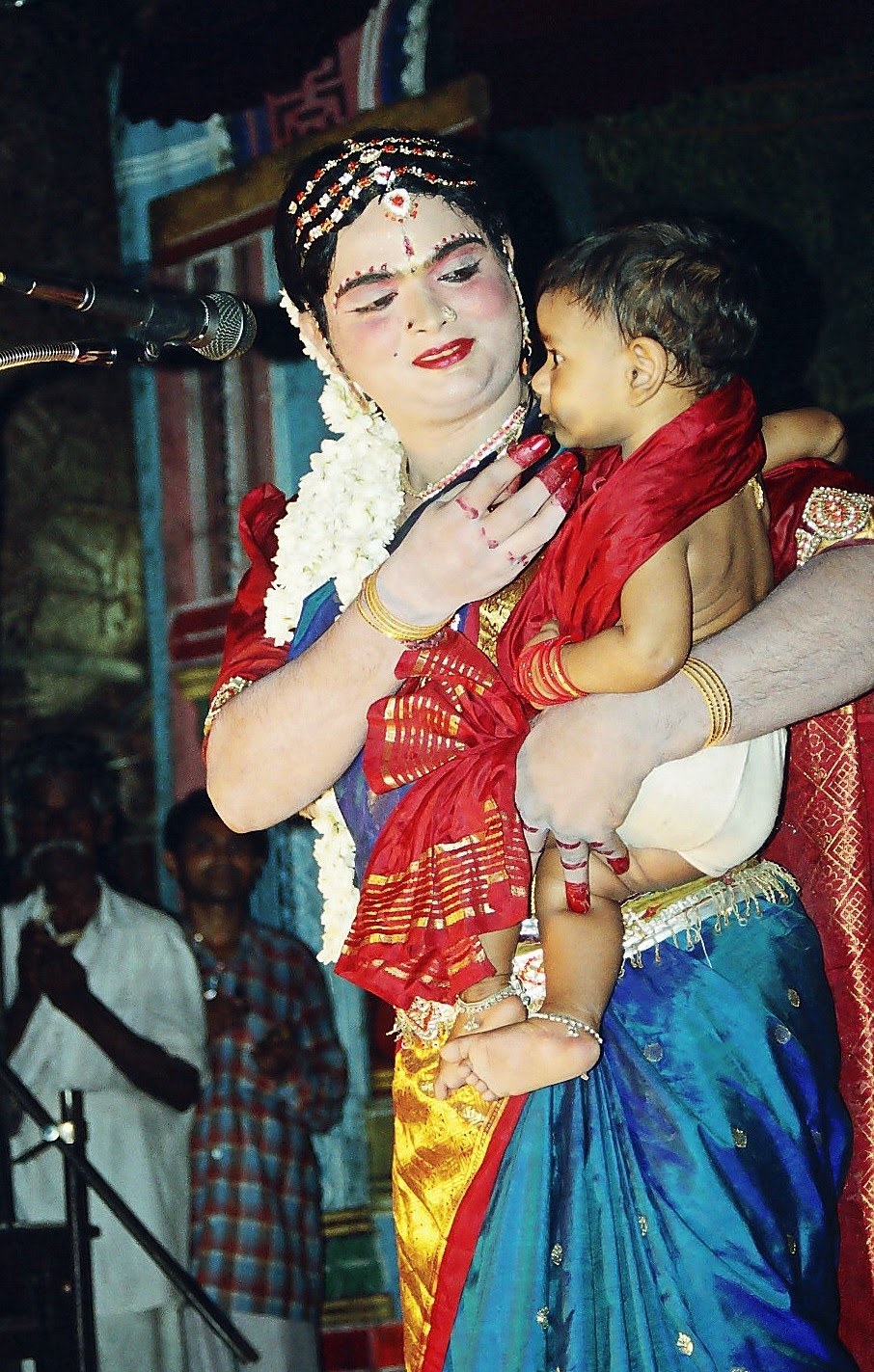 An elaborate performance for two or three nights where the audience co-exist with the characters making them dwell with the story where the brotherly affection of Iranian and Iraniakkadhan, the family life of Iranian Leelavathy and Prahaladhan, the father son affection between Iranaian and Prahaladan as the song goes as ‘vandhan Prahaladhanan thanthaiyar munney vaaraan prahaladhanan’, the plight of the affectionate father on coming to know that the son is not growing the way he desires, as a model of many women the mother’s (Leelavathi’s) suffocation over the conflict of the father and son, etc are portrayed bringing out the subtle human emotions and discussing over the complexities of psychological issues. Being a community theatre, the interactions between the characters and the interaction between the public and the characters form a spontaneous system of socio-cultural education, redefining the moral and ethical values relating it to the current period. 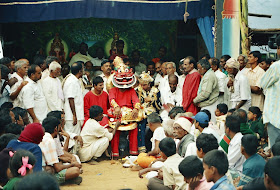 Prof. Mu sellen has recorded in detail about this tradition in his book “Thanjai Mavatta Nattupura Kalaigal – Prahaladha Charithiram’. Prof Sundar Kaliyappan is making a continuous observation and research on this tradition for a period of more than a decade and a half. The National Folklore Support centre, Chennai has documented and archived this community theatre Iranian Nadagam performance of various communities around Thanjavur, Thiruvarur, Nagappattinam and Coimbatore districts. 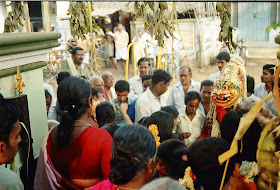 Walking down the streets blessing all, Ayyampettai

Though the tradition seems dissolved over time in many places, still on hearing

the verses of the Kamba Sthothiram, till the Tamil mind which ignites and enters into trances does exist, we can remain the spectators viewing these ancient art traditions resurrecting, reincarnating and fine-tuning themselves. Also, it is our duty to contribute our attention tonurtureand conservethese cultural assets becausethey are the roots of our survival and civilization.

One thought on “Iranian Nadagam”